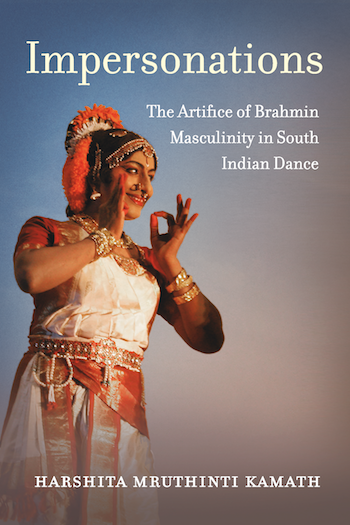 Chapter from the book: Kamath, H. 2019. Impersonations: The Artifice of Brahmin Masculinity in South Indian Dance.

This chapter and the next center on performance analysis of the Bhāmākalāpam dance drama, particularly focusing on the characters of the sūtradhāra, Madhavi, and Madhava. Drawing on the work of scholars of Indian theater, including David Shulman, Susan Seizer, and Richard Schechner, among others, this chapter provides detailed accounts of the dialogues and performance techniques of Bhāmākalāpam dance drama. The theoretical centerpiece of the chapter rests on the reimagining of the term māyā, translated here as “constructed artifice.” According to contemporary teachers and dancers within the village of Kuchipudi, it is through māyā that a single performer can be the sūtradhāra when speaking to the audience, Madhavi when seen through the eyes of Satyabhama, and Madhava when seen by Krishna. Madhavi, a character serving the dual roles of friend (sakhi) and vidūṣaka (clown), parodies both Satyabhama’s idealized gender portrayal onstage and the brahmin male body donning her strī-vēṣam.