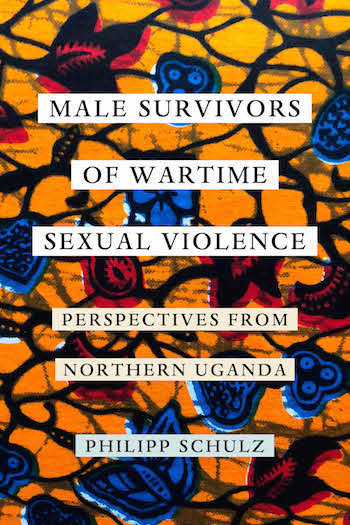 Although wartime sexual violence against men occurs more frequently than is commonly assumed, its dynamics are remarkably underexplored, and male survivors’ experiences remain particularly overlooked. This reality is poignant in northern Uganda, where sexual violence against men during the early stages of the conflict was geographically widespread, yet now accounts of those incidents are not just silenced and neglected locally but also widely absent from analyses of the war. Based on rare empirical data, this book seeks to remedy this marginalization and to illuminate the seldom-heard voices of male sexual violence survivors in northern Uganda, bringing to light their experiences of gendered harms, agency, and justice.

“Schulz offers a nuanced frame for understanding the dynamic and varied lived experiences of male survivors. Essential reading for anyone who wants to better comprehend conflict-related sexual violence as well as political violence more generally.” MARIA ERIKSSON BAAZ, author of Sexual Violence as a Weapon of War? Perceptions, Prescriptions, Problems in the Congo and Beyond

“This extraordinary book opens new conceptual pathways in and beyond the field of transitional justice. A rich exploration of justice as a survivor-led praxis and a generous methodological offering for conducting ethical research.” ERIN BAINES, author of Buried in the Heart: Women, Complex Victimhood and the War in Northern Uganda

“In his ethnographically nuanced study, Schulz charts a more grounded approach to international justice. The Ugandan men who have survived wartime rape have a lot to teach us—about constructing non-oppressive masculinities, creating mutual support, and building gender-aware sustainable peace.” CYNTHIA ENLOE, author of The Big Push: Exposing and Challenging the Persistence of Patriarchy

PHILIPP SCHULZ is a Postdoctoral Researcher at University of Bremen’s Institute for Intercultural and International Studies.