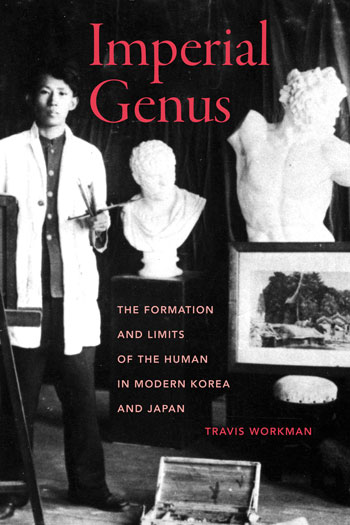 Imperial Genus begins with the turn to world culture and ideas of the generally human in Japan’s cultural policy in Korea in 1919. How were concepts of the human’s genus-being operative in the discourses of the Japanese empire? How did they inform the imagination and representation of modernity in colonial Korea? Travis Workman delves into these questions through texts in philosophy, literature, and social science.

Imperial Genus focuses on how notions of human generality mediated uncertainty between the transcendental and the empirical, the universal and the particular, and empire and colony. It shows how cosmopolitan cultural principles, the proletarian arts, and Pan-Asian imperial nationalism converged with practices of colonial governmentality. It is a genealogy of the various articulations of the human’s genus-being within modern humanist thinking in East Asia, as well as an exploration of the limits of the human as both concept and historical figure.

“Imperial Genus is an expansive and erudite study of Culturalism, Marxism, and Japanophone discourses across colonial Korea and imperial Japan. Nothing exists in Korean Studies that is remotely close to the breadth and depth of the scholarship and theoretical sophistication in Travis Workman’s book. It offers three related investigations: the philosophical substrata of modern thought and culture in the colony and Japan proper, their ideological underpinnings and implications, and a thorough reinterpretation of the colonial Korean literary canon from these perspectives.” JIN-KYUNG LEE, author of Service Economies: Militarism, Sex Work, and Migrant Labor in South Korea

“Travis Workman’s compelling arguments take as their point of departure the notion of genus-being. Workman dispenses once and for all with the colonizer/colonized binary, demonstrating brilliantly how intellectuals associated with different movements in both Japan and Korea grapple with the meaning of the human itself as they attempt to think through capitalist modernity.” THEODORE HUGHES, author of Literature and Film in Cold War South Korea: Freedom’s Frontier

TRAVIS WORKMAN is Assistant Professor in the Department of Asian Languages and Literatures at the University of Minnesota, Twin Cities.

Workman, T. 2015. Imperial Genus: The Formation and Limits of the Human in Modern Korea and Japan. California: University of California Press. DOI: https://doi.org/10.1525/luminos.9