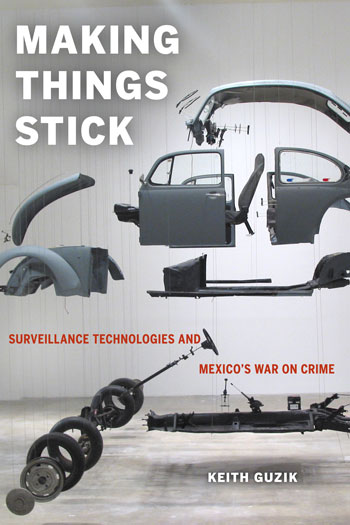 With Mexico’s War on Crime as the backdrop, Making Things Stick offers an innovative analysis of how surveillance technologies impact governance in the global society. More than just tools to monitor ordinary people, surveillance technologies are imagined by government officials as a way to reform the national state by focusing on the material things—cellular phones, automobiles, human bodies—that can enable crime. In describing the challenges that the Mexican government has encountered in implementing this novel approach to social control, Keith Guzik presents surveillance technologies as a sign of state weakness rather than strength and as an opportunity for civic engagement rather than retreat.

“This book rethinks the idea of surveillance. Surveillance technologies are elements in an assemblage of other objects and people, so their materiality matters for how we understand surveillance and power. I very much welcome the focus on the relationships between technologies, authorities, and those who are governed within their purview.” LOUISE AMOORE, author of The Politics of Possibility, Professor of Human Geography, Durham University

“This is a very interesting work, filled with insight and built on solid empirical research. It shows a deep understanding of the role of surveillance in modern societies and, within that larger aim, focuses on creative and compelling ways in the case of Mexico.”DIANE E. DAVIS, Charles Dyer Norton Professor of Regional Planning and Urbanism, Harvard University

KEITH GUZIK is Associate Professor of Sociology at the University of Colorado, Denver. He is the author of Arresting Abuse and the coeditor of The Mangle in Practice.