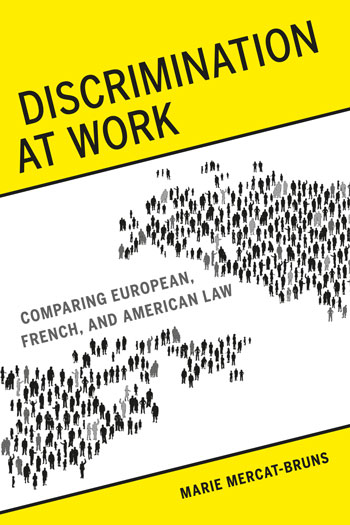 How do the United States and France differ in laws and attitudes concerning discrimination at work? Franco-American scholar Marie Mercat-Bruns interviews prominent legal scholars to demonstrate how these two post-industrial democracies have adopted divergent strategies. Whereas employers in the United States and France rarely discriminate openly, deep systemic discrimination exists in both countries, each with a unique history of dealing with difference. Powerful and incisive, the book examines hot-button issues such as racial and religious bias, sexual harassment, gender discrimination, and equality for LGBT individuals, highlighting comparisons that will further discussions on social equality and fundamental human rights across borders.

“Mercat-Bruns makes original use of comparative law to shed new light on the issue of discrimination at work. In addition to reviewing the literature, she enters into a rich dialogue with American experts about their core findings. This book makes a fascinating and useful contribution to one of today’s most pressing issues.” ANTOINE GARAPON, Secretary General, Director of the Comparative Law Program, Institut des Hautes Etudes sur la Justice (IHEJ

MARIE MERCAT-BRUNS is Affiliated Professor at Sciences Po Law School and Associate Professor in Labor and Employment Law at the Conservatoire National des Arts et Métiers in Paris. She is a member of the Research Institute LISE CNRS (Codirector of the program Gender, Categories and Policy) and also of the scientific committee of PRESAGE (Sciences Po/OFCE Research and Academic Program on Gender Thinking).

This book has not undergone external peer review. See our Peer Review Policies for more information.